Written by corkcity on May 28, 2016. Posted in Alcohol and Drugs Education Awareness 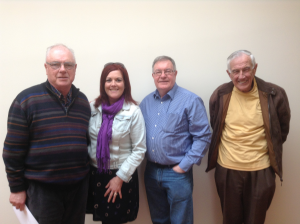 Cork Local Drug and Alcohol Task Force (CLDATF) is a board composed of statutory, community, voluntary sector and public representatives. The Task force funds 21 projects that work to combat drug and alcohol misuse in Cork communities.

The sitting community representatives are keen to encourage new voices from communities around the city to come forward and participate, and emphasise that this role is essential in countering disadvantage and ensuring that resources are targeted to drug and alcohol issues. Support to community representation on the Task Force is provided by the Community Outreach Drug and Alcohol Support Project (CODAAP) at Cork City Partnership, who meet regularly with community reps, provide information on training, education opportunities, assist with meeting preparation etc.  CODAAP’s Mella Magee spoke with the current community representatives to get their take on what the role involves and find out why people should come forward for the new vacancies.

How would you describe the role of community representation on the CLDATF Grainne?

Grainne (Walsh, representing Cork South West) “For me it’s about looking after your community, and bringing the issues of your community to a place like the CLDATF. It’s a passion about working in the community, engaging with people that have issues and concerns and seeing what you can do to the best of your ability to ensure issues get solved. Without representation in particular areas or communities, the voice of the community will be lost at the highest level of decision making. As sitting reps, we have always ensured that there is a community voice at the table and that it is heard.”

As the longest serving community representative on the CLDATF Tom (Carey), what would you see as the challenges and opportunities to the position?

“Community representation can be challenging, but it is very important, and never more so than during the current period. The political impasse and the last election have shown a complete disconnect between the people and the democratic system. People at ground level don’t feel they are being listened to by those in power, don’t feel they have places to go with their issues, or that when they do that the response is adequate. Austerity has exacerbated this, with cuts to essential and frontline services. This makes it really important for people from communities to get involved in forums like the CLDATF.  It can be a balancing act to try and ensure services are maintained, but I think the communities as a whole have been successful in this.”

Do you think that community representatives tempered the impact of the recession?

Aaron (O’Connell – Cork Simon, representing minority communities) “Absolutely, while the services in Cork are committed to maintaining frontline services, they have to cope with budgetary pressures for claw-back. A strong community voice in the presence of these budgetary pressures is of incalculable benefit. The social inclusion end of the HSE fought hard to hold on to budgets during austerity, but it is a battle, in which community representatives play an essential role.” Tom agrees, stating “we have kept the community on the agenda at the CLDATF during the austerity period.”

Last but not least, ‘what’s in it for you’ in being a community representative?

There was unanimous agreement that the position brings huge benefits and learning – along with the work!  Grainne said; “I have learnt so much about how things work at decision making level. It is a fantastic opportunity for anyone to find out what is happening at a higher level.” Similarly, Donal (Counihan, representing Cork South East) emphasised the benefits of making links at the table “It is great to have links with other ‘on the ground’ services, such as the Gardaí. Being part of interagency working is a valuable way to share approaches to issues and build collective responses.”  On a personal level, the role is rewarding, with Tom saying “You gain an understanding of the connection between certain issues and social policy and a realisation that no one person has the skills to sort any one problem completely.” All the reps agreed that the team working process was confidence building. You are seeing that “what I have to say is equally as valid and important as what everyone else in the room has to say.” Aaron summed it up “Making sure the community voice is heard is work, but its satisfying work. You are exercising your passions for problem solving and being part of a community re-build.”

This website uses cookies to improve your experience while you navigate through the website. Out of these, the cookies that are categorized as necessary are stored on your browser as they are essential for the working of basic functionalities of the website. We also use third-party cookies that help us analyze and understand how you use this website. These cookies will be stored in your browser only with your consent. You also have the option to opt-out of these cookies. But opting out of some of these cookies may affect your browsing experience.
Necessary Always Enabled

Any cookies that may not be particularly necessary for the website to function and is used specifically to collect user personal data via analytics, ads, other embedded contents are termed as non-necessary cookies. It is mandatory to procure user consent prior to running these cookies on your website.